Starting out as a cub sports reporter in Colorado, Damon Runyon found the dusty sandlots of western semi-pro baseball an inadequate field for his major-league writing talent. Moving to New York City, he landed a prestigious sports beat at Hearst's New York American, where he regaled readers with detailed, behind-the scenes tales of famous sportsmen such as Jack Dempsey and Babe Ruth. Runyon later moved on to short stories and Broadway plays, with his literary focus on the gamblers, swindlers, down-and-outers and larger-than-lifes populating New York's sidewalks, bars, and burrows. The classic "Runyonesque" was a slangy and wordly-wise city dweller, but real fascination in Runyon's writing can also be found in his newspaper sketching of talented and sympathetic men, simply trying to pitch, hit and catch a small white ball.

As a tribute to this master of sports storytelling, The Archive is pleased to present this modest collection of Runyon's newspaper writing--all of it. At present, "9,000" is only a guess, as the project began in January, 2020, and Runyon's career in the big leagues of the American press spanned more than 30 years of near-daily columns and articles--starting in the Hearst flagship paper, the New York American, in 1911.

The Woman Boss of Denver

The Voice That Breathed O'er Eden

Matty Great in Face of Defeat

Massacre Too Soft a Word to
Convey Idea of the Game
Buffalo Courier/October 27, 1911

Says Rube Marquard Does Not Know How

Chance to Have Free Hand with Yanks

McGraw is Not Worried by Protest

Mayer May Also be Important in Coming Battles

Breaks of Luck Are a Big Factor

Alexander the Hope of Phils

Johnny Dundee the Winner of Battle

Barrett and Red Team Too Much for Pennsy

This Kauff is Some Hitter

Willard-Moran Bout is Too Short

Why Not Referee's Decision?

The Making of a Fighter

Jim May Break In This Year

Blame is Put on Player Limit

Much Ado About Nothing
New York American/January 1, 1917

The Fate of Johnny Dundee

A Word About Mike Donlin

The Effect of Food

A Stitch in Time

Kauff is Hero in Giants Win Over Chicago

Huns Pleased at Arrival of Yanks on German Soil

II: A Tale of Two Fists

While Frazee Flails Him

"Great to Be Champion"
Says King of Sluggers
​Washington Times/June 13, 1921 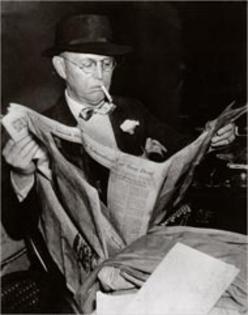 Poker is Preserver of Peace


OKLAHOMA CITY, Okla., April 3.—Jim Thorpe’s adopted townspeople did not get a chance to see him commit right field in a big league uniform this afternoon, as was threatened by the exhibition schedule of the Giants and the Tigers. A sandstorm spilled itself over the local baseball orchard with such violence that the game was called off before it started.

A good crowd had collected in the ball yard, and the gate money was returned, which was a terrible heart wrench to Secretary John B. Foster, of the Giants. It was clear enough over head, and the ball players went out in full regalia prepared to pastime, but it was soon discovered that the instrument of amusement could not be located when it was knocked into the air or along the ground, on account of the profusion of the wind-wafted sand.

Without a baseball ball players are practically helpless, so the game was abandoned, and the athletes returned to their prospective hotels. Up to this time the boys have inhaled their ham and beans at the same hostelries, but now they have been split out.

It was feared that the practice of inviting one another to private rooms for private pugilistics might become a custom if the lads were permitted to remain in close contact. It can still be done, of course, but the separation makes it more difficult.

The Giants are at the Lee Huckins Hotel, and the Tigers are around the corner at the Kinkade. It would involve a walk of at least a hundred yards did a Giant yearn to punch a Tiger in the puss, or vice versa, and it seems unlikely that a ball player would indulge in that much exercise just for a fight. En route each club occupies two separate cars, and between these cars has been placed another car containing the club officials and the Detroit and New York baseball writers.

This car is neutral territory. The athletes cannot get at each other across this Belgium of the baseball, because a poker game in the middle of it forms an impassable barrier. The New York and Detroit baseball writers do not fight each other, as they esteem fighting a low and ungentlemanly practice, and, besides this, the Detroit writers look like very tough guys.

Tyrus Raymond Cobb, who expected to leave the tourists at Wichita Falls, but who failed to make train connections, appeared in the lobby of the hotel where the Giants are stopping today, and made inquiry for mail. None of the Giants were present at the time, having gone on out to the baseball corral, but it is not likely the Georgia Prune would have encountered trouble even had they all been there.

Most of the Giants studiously avoid conversation with Tyrus, but they are not violently disposed toward him off the field. Anyway, the cause of all the turmoil was finally removed this afternoon, as Cobb went on to join the Cincinnati Reds. Allowing Tyrus to train with a National League ball club when he has the option to work with his own outfit is bound to meet with more or less criticism.

Jim Thorpe, who made a good showing at Wichita Falls yesterday, was brought along with the Giant regulars for the express purpose of satisfying the desire of Oklahoma City to see Jeems in a large league livery. Jim does not originate in Oklahoma City, being indigenous to a place called Prague, Okla., but he spent last winter here, owns an abode here and calls this his home town.

When he is not booting footballs for Canton, Ohio, or baseballs for New York and Milwaukee, he punches the bag on convenient corners hereabouts with the natives. Jeems has come along in baseball the past couple of years. He can go fetch ’em out in right field with anybody in the country, and he can take as hard a swing at that old apple, as the lads call it, as the next man, and maybe harder.

He is liable to fan out and he is liable to but up the pastime, but never can it be said of James that he is not trying. If ever a man lived who is entitled to get by in big league ball it is this simple-hearted, laughing Indian He never quits on himself. It will be a real tragedy of the game if it is his fate to again fail to make the big line.

The tourists leave here at midnight for Tulsa.

Charlie Weinert in Second Round

Dempsey Tells Runyon He Had Hard Time Getting Right, But He's O.K. Now

Jack Floored, Then Puts Firpo Away

Light Up "The Great White Way"

On the Road Again With Jack Dempsey

Matching Them Out of Class Hurting Game

Death for Boxing If Tex is Ousted

Floyd Johnson to Begin All Over as a Fighter

Dempsey Emerging From the Fog

Babe and His Money Soon Parted

Better Boxing in the Four-Round Game

Brother Fighters of the Queensbury Realm

Ode to the Other Jack Dempsey

A Gallery of Boxiana's Greatest Battlers

Care and Feeding of Damon Runyon

In 15 Rounds Full Of Thrills

Runyan Recalls Dempsey When He

Racing North and South of the Border

Local Gadiators in The Manly Art

Prepare for Fight in the Bull Ring

The Black Boxer from a

D. Runyon, a Champ, is One Fast Hound

Delaney Wins from Paulino on Foul

A Slip of the Pen

Back in the Good Old Days

Columbia Pulled its Punches on Coast,

A Chat with the Champ

European Writers Will Be Here

Jim Braddock, 5-to-1 Shot, May Surprise

Irish Will Be Out in Force Tomorrow

"The Will to Win" Gives